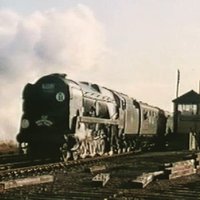 The First Merchant Navy on the S&D by Anthony Wray

As closure of the Mangots-field to Bath branch (and the S & D) drew inexorably closer so the Locomotive Club of Great Britain and the Railway Correspondence and Travel Society organised two 'Farewell' tours. The L.C.G.B. Tour was scheduled for Saturday 1st January 1966, whilst the R.C.T.S. Tour was scheduled for Sunday 2nd January 1966, closure of the line was due on Monday 3rd.

At the last moment closure was postponed due to one of the 'replacement' bus operators failing to be able to offer a service to those villages no longer having a railway. An 'emergency' timetable of three trains per day on the Mangotsfield to Bath Branch, and four trains per day on the S & D, was introduced until such time as the problems could be sorted out, this in actual fact, only lasting until early March.

Although the line was given a brief respite both Societies decided to con-tinue to run their respective rail tours, partly because steam traction was due to be banned from the Western Region after 3rd January 1966 and therefore by postponing the tours all-steam traction could not be guaranteed. I have recently been given a copy of the L.C.G.B. Rail Tour pro-gramme, along with an accompanying newspaper cutting relevant to it (the text of which is reproduced later). From this paperwork more detail can now be published of one of the final railtours to travel the Mangotsfield to Bath branch and Somerset and Dorset Railway. 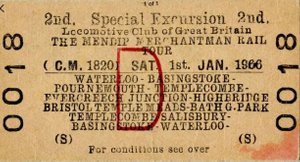 The "Mendip Merchantman‟ Rail Tour took its name from the heights of the Mendips and from Bristol, the city of the Merchant Venturers. It start-ed from Waterloo and ran via Basingstoke to Bournemouth Central, expected to be the last occasion for some considerable time that it would be possible to run non-stop from Waterloo to Bournemouth Central with a reasonable time schedule. The train consisted of ten coaches of BR. and S.R. stock , two Brake Second Corridors, seven Second Opens and a

Restaurant Buffet. A full Restaurant Car service of meals was available, with breakfast being served at 8.35; two lunch sittings at 12.20 and 14.15; afternoon tea at 16.00 and two dinner sittings at 17.45 and 19.0. A note in the programme asking passengers to "Kindly avoid passing through the dining saloon while meals are being served".

The tour was scheduled to start from Waterloo at 8.32 and was hauled by Merchant Navy Pacific 35011 'General Steam Navigation'. There was a two hour timing for the 108 mile journey to Bournemouth Central where water was taken, then the train ran through Poole to Broadstone for a photographic stop.

This is where the Somerset and Dorset proper started, and this tour marked the first visit of a Merchant Navy to the line, because of weight restrictions they were officially banned from the S & D but with closure only months away 'nothing really mattered any more', and the restriction was waived to allow the big Pacific to follow the path of its smaller West Country and Battle of Britain sisters for a run up to Templecombe. Here the Merchant Navy was due to be changed for two smaller

locomotives for the trip onwards to Evercreech Junction and the branch to High-bridge.

Originally B.R. Standard Class 4 2-6-0's were requested but in recent years the shameful lack of maintenance carried out (or not as the case may be) on the branch meant that even these locomotives were no longer permitted over the line. Instead two of the lvatt Class 2 2-6-2Ts were rostered, these being 41307 and 41283. In my view it was far more fitting that the Ivatt's were chosen, being more regular performers over the S & D (especially the branch) than the Standard 4 2-6-0's. Since their introduction to Bath in 1950 these popular little loco's han-dled much of the local traffic, both on the Mangotsfield to Bath branch and the Highbridge branch, and were therefore far more reminiscent of branch line work in the area.

The train was due to leave Templecombe at 12.18 stopping for ten minutes at Evercreech for water, before continuing onto the branch itself. There was a photographic stop planned for Glastonbury and then it was on to Highbridge (S & D Platform) where passengers were asked to "Detrain and make their own way to the Main Line Platform whilst the train shunts ".

Departure from Highbndge (Main Line Platform) was scheduled for 14.25 and hauling the train from here to Bristol Temple Meads and on to Bath was B.R. Standard 9F 92243 -or at least that was the plan. Sadly, howev-er, the big 2-10-0 ground to a halt near Staple Hill and was failed. 48760, one of the two Stanier 8F 2-8-0's scheduled to double head the train over the Mendips, was summoned from Bath and rescued the stranded train, pulling the 9F and ten coaches from Staple Hill through Mangotsfield and Bitton to Green Park. This must surely have been the most powerful combination of locomotives ever to operate a train over the line (albeit with 92243 not doing anything) for as far as I know there was never an incidence of two 9F's double heading a train -the only more powerful combination possible.

At Bath 48760 along with 48309, double-headed the train onwards to Templecombe, although an unscheduled halt was made at Binegar when signalman Ernest Cross halted the train to vent the understandable anger that S & D staff felt at the way in which Western Region Authorities had run down their once proud railway in readiness for closure, I expect Mr Cross had a few pints bought for him in the village pub that evening!

At Templecombe the two 8F's were swapped for 35011 'General Steam Navigation' once again, with the train over ninety minutes late by now the scheduled departure time of 17.34, and arrival at Waterloo at 20.01 obviously went by the board. The organisers were hoping for a high speed run from Templecombe to London and, providing they had a clear road and an enthusiastic crew, I should think that they probably experienced that as a fitting climax to a memorable, but sad tour.

Orignally published in our members magazine The Packet, issue 5 - Summer 2017

Further articles on these tours can be found here