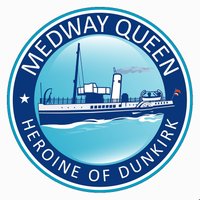 On the river Medway, the GSNC worked closely with the New Medway Steam Packet Company and Captain J. H. Wills of the GSNC and his wife were on board when PS Medway Queen made her maiden voyage across the Thames Estuary on Friday 18th July 1924. In 1936 GSN acquired the New Medway Company but, again, retained the name for trading purposes. To read more abiout the history of the General Steam Navigation Company click here.

The Medway Queen Preservation Society have rebuilt their vessel structurally with the aid of HLF funding and are now engaged in fitting out the ship, initially for use as a floating venue for meetings and events. The long term aim is to see the ship sail again under its own power. Medway Queen is berthed in Gillingham, Kent, where a small team of dedicated volunteers are pushing the project forward. Like the locomotive, progress on the ship is governed by the availability of resources – both physical and financial. Although a Kent based organisation, Medway Queen Preservation Society has worldwide support and has a PR team based, conveniently, in Wiltshire and not far from Blunsdon! 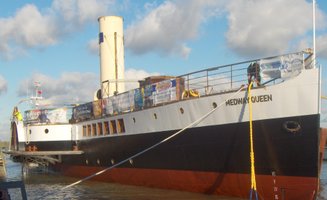 The aims of the two groups' cooperation will be to support one another in publicity campaigns and appropriate merchandising and marketing initiatives. We have regulary produced promotional wagons in both 00 and N Gauges for model railways.

For some years now the Medway Queen Preservation Society has benefitted from income generated by a series of such wagons and our joint projects reach a wider market and generate funds for both teams. Details of the models available and how to purchase them can be found here.

To find out more about this great project you can view the Medway Queen Preservation Societys website by clicking here.