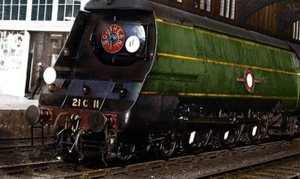 We always welcome submissions are articles and recollections for publication either within our members magazine "The Packet" either in full or as an abstract with copies of the full articles being available on their dedicated page below.

Paul Silvestri provides a selection of logs that is representative of normal running on scheduled service trains during the period 1959 to 1965, i.e. after GSN had been rebuilt.
Read more ...

Alan Newman was a Nine Elms Engineman between 1962 and 1967, he has kindly allowed us to reproduce his article

"35011 at Nine Elms "Just another day doing the best job in the world, with the finest steam locomotives ever built"

Read this extraordinary achivement by 35011 here

35011 the first Merchant Navy on the Somerset and Dorset

We recently heard from one of our members, Alan Peake, by way of a fascinating email. Alan's background is the shipping company itself, rather than the Southern Railway.

His late father, William George ‘Bill’ Peake (1899-1962) joined the GSN Co. as an apprentice engineer at their Stowage Repair Works at Deptford in 1916.
Read more...